EXPERIMENTS AND SIMUALTION ON CAVITATION EROSION IN CRYOGENIC LIQUIDS – CRYOCAV

Optimal operation of turbopumps is crucial for all liquid fuel rocket engines. To reduce weight, these pumps often operate at critical conditions, where dynamic instability and cavitation are unavoidable. In cryogenic engines, the fuel and oxidizer used are liquid usually hydrogen and liquid oxygen at very low temperatures (about 14 and 90 K, respectively). Many studies were already performed to investigate these phenomena, yet, due to the complexity of the measurements, most avoid experiments in cryogenic fluids. Hence no data on thermodynamic effects of cavitation or on the specifics of cavitation erosion in cryogenic fluids exist, what threatens further progression of technology.
In the proposed project we intend to perform experiments in cryogenic fluids where cavitation will be initiated acoustically – by ultrasound. We intend to characterize the development, the dynamics and the erosion of cavitation on an ultrasonic horn, which will be operated at elevated pressures in different cryogenic fluids. Although the mechanism for generating fluid cavitation in this method differs from that occurring in flowing systems and hydraulic machines, its nature is believed to be basically similar. Specifically we intend to investigate a state, which appears somehow intermediate between hydrodynamic and acoustic cavitation, namely a large cavity attached to an ultrasonic horn tip and collapsing with its self-generated subharmonic cycle frequency (the so called “acoustic supercavitation”) and which resembles the conditions in the turbopump inducer. Moreover the rapidly changing pressure field in ultrasonic cavitation could mimic the conditions at turbopump fast startup – the experimental data would therefore be valuable for accurate prediction of cavitation during this period of pump operation. Direct users of the results are researchers and industry that are dealing with cavitation erosion and specific topics of cavitating flow. 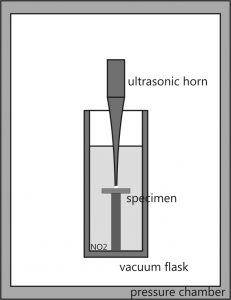 Design of the test facility.